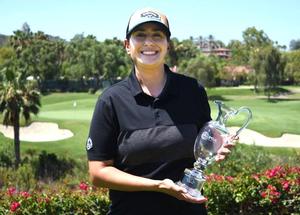 Ovadia, the tournament's No. 1 seed, scored a 2-up victory over second-seeded Alison Curdt, a PGA Master Professional from Wood Ranch GC in Simi Valley, in the final match at The Crosby at Rancho Sante Fe.

Ovadia, the first assistant pro at the River Course at the Alisal in Solvang and the assistant girls golf coach at Santa Ynez High,  received $1,000 for the championship.

To reach the final, she defeated fourth seed Ericka Llagan of SeaCliff CC, 4 & 2 in the semifinals. She downed No. 8 seed Junki Suzuki from Rolling Hills CC 5 & 4 in the quarterfinals. The quarter and semifinals were played Monday at The Crosby.

In her three rounds of match play, Ovadia made 17 birdies.  She was coming off a second-place finish at the Women's Stroke Play Series event at Rustic Canyon Golf Course, where she tied for first but fell in a one-hole playoff.

Ovadia played at Dos Pueblos, where she helped the Chargers win CIF titles in 2002 and 2003.

In 2007, she was the Ivy League individual champion while playing for Columbia. She was inducted into the Columbia University Athletic Hall of Fame in 2016.