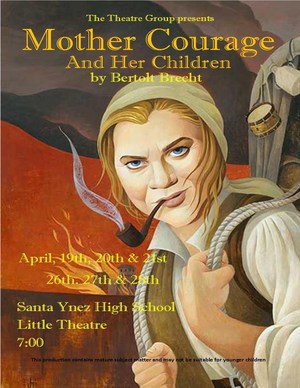 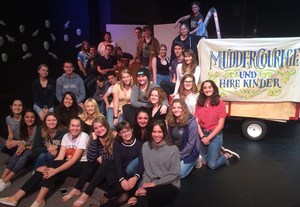 Join us on April 19-21 and 26-28 at 7 PM in the SYHS Little Theatre for this groundbreaking performance.

The Santa Ynez High School Theatre Group is presenting for its spring production, perhaps its most ambitious project to date, German playwright Bertolt Brecht’s anti-war play Mother Courage and Her Children. Featuring a cast of 32, the production includes 10 songs penned by Brecht and several collaborators, notably composer Kurt Weill, performed and sung by members of the cast and ensemble. Director Jeff McKinnon, in keeping with Brecht’s ideas about “epic theatre,” has designed a stripped-down stage featuring six constantly shifting components including a farm wagon and a piano on wheels.

Arguably the most influential figure of 20th century theatre, Bertolt Brecht wrote Mother Courage in 1939 while in exile in Denmark. in reaction to Hitler and Stalin signing a pact in alliance against the Allied forces. Setting his anti-war allegory in the 17th Century 30 Years War between Catholic Poland and Protestant Sweden, he provides us with the pragmatic protagonist Ana Fierling, also known as Mother Courage, who with her retail wagon follows the destructive path of the war selling her wares to support herself and her three children.

Mother Courage and Her Children plays Thursdays through Saturdays, April 19-21 and 26-28 at 7:00 in the Santa Ynez High School Little Theatre. Show times are at 7:00, and General Admission tickets are $5.00 for students and $10.00 for adults. Because of the provocative subject matter, this production may not be suitable for younger children. For more information call 688-6487 x2361.