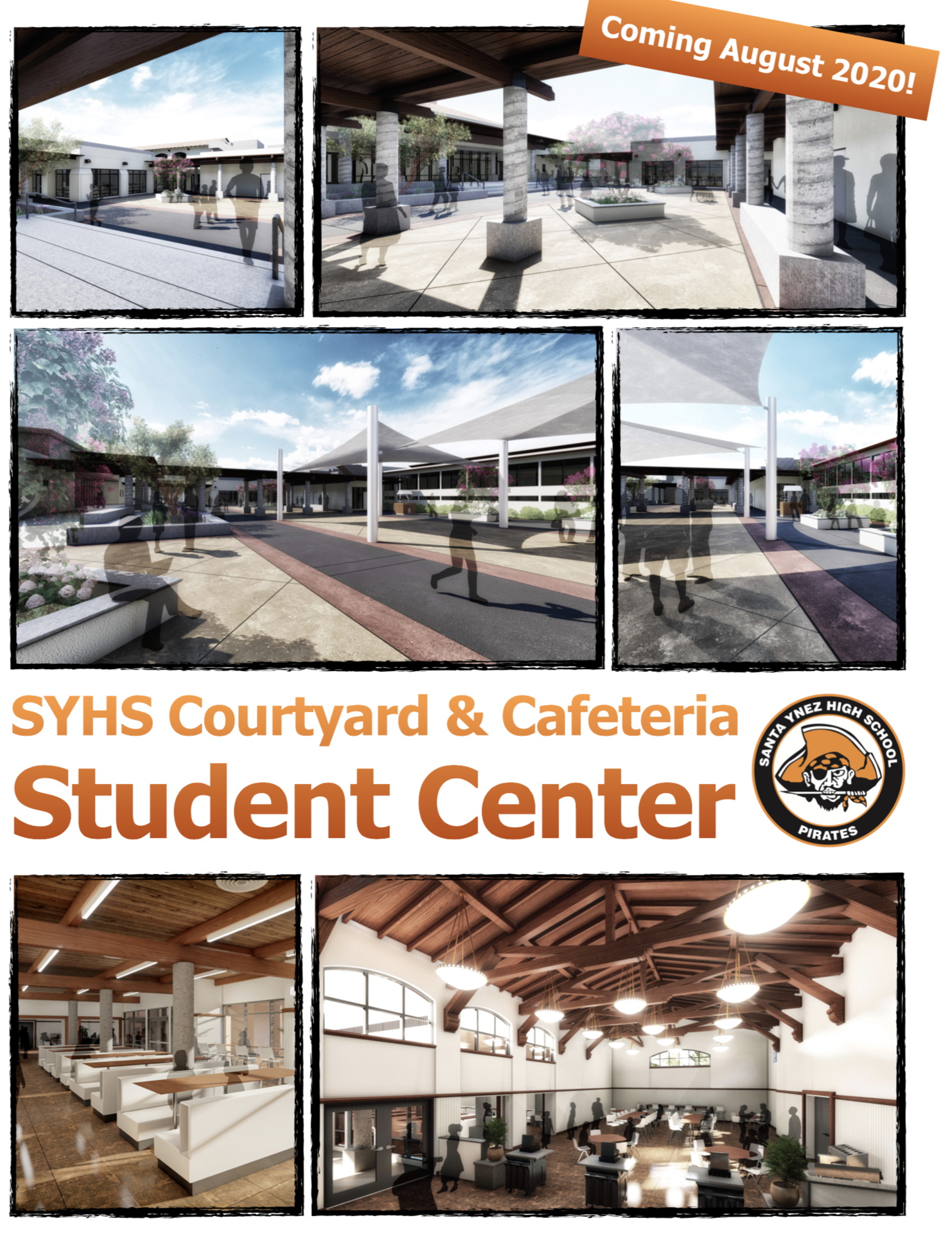 The Santa Ynez Valley Union High School District is well underway with an exciting scope of construction work this year.  The last of the Measure K funds are being utilized for more below and above-ground utility upgrades, additional window and roofing replacement, as well as handicap accessibility improvements.  Thank you again to our Valley voters for providing us with this opportunity .  Additional construction is taking place thanks to the use of accrued Developer Fees over the years.  These funds are being used to engage in new construction in the form of a student dining area that will result in the first-ever indoor seating for students.  This increased capacity is long overdue.  District funds are adding other dimensions to the project that will result in much improved and increased services and educational opportunities for our students.  The community will also benefit as the sum total of these efforts will result in a first-class event space.

All of this work should be finished in time for the start of the 2020-2021 school year.

Stay tuned for a grand opening ceremony in August, 2020.

The pictures above are earlier renderings by our architect of three different aspects of our construction this year:

Cafeteria – The old stage has been demolished to facilitate a seating area for students.  This space will also include a new “food court” service area.

New addition – Extending into the former “pit” area, this covers almost 1,400 square feet of space that will be a seating area for students.  When combined with the cafeteria space, there will be seating for approximately 250 students.

Courtyard - One of the Measure K portions of work in the pit area involved significant underground utility-replacement work for sewer, water and natural gas.  The sewer line bisects the pit running east to west and also north and south, along with several water lines.  This led to a conversation about how we wanted to put it back together.  The opportunity to reinvent the space presented itself and we seized it.  Students are looking forward to a more functional and fun space that looks more like a college campus.  Additionally, foot traffic flow will be greatly improved along with increased safety as supervision in this area will be more effective with improved lines of sight.

Demolition continued into early September, but the news got even better: construction began!  Footings are being poured (MPR and new addition), walls are being upgraded for shear strength (think wind and earthquake resistance) and HVAC demo for the MPR, band room, kitchen and restaurant classroom is just about complete.  Additionally, the roof tear-off began on the band room and MRP building.  There is some urgency associated with the roof work getting buttoned up before any rain comes our way.

In addition to exterior and interior demo, we also started a lot of work related to handicapped accessibility in the main parking lot, the interior bathrooms in the multi-purpose bathrooms and also the E-Wing bathrooms.  Given the age of our facilities, the upgrades were required in order to comply with laws related to the Americans with Disabilities Act of 1990.

Exterior demolition begins!  Known as “heavy demo”, a lot of equipment was needed, to clear the space, creating a tremendous amount of debris that needed to be hauled off.  Interior demolition, known as “soft demo”, also got underway towards the end of the month.